Is it possible to create physical attraction via text? Like heck it is. Although she isn’t with you in person, you can use your phone as a weapon to ramp up her desire so that she can’t wait to see you again. In this article, we give you the lowdown on how to use your phone to make her want you more and more. We’ll take a look at why your current texting habits might be destructive and how to stay out of the dreaded friend zone, a land where attraction dies. 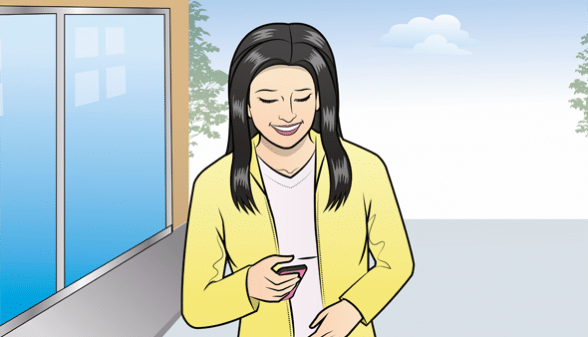 It’s not always possible to be in the company of a woman you want to date and see more of. Therefore, wouldn’t it be awesome if there was a way to build physical attraction when you’re not with her?

Fortunately, there is – and it’s called texting!

If you know how to build physical attraction via text, you’ve as good as sealed a date with that girl you really like.

The problem is that a lot of guys go about building attraction the wrong way. Instead of targeting a woman’s feelings and emotions, they try to logically convince her that they’ve got what she wants.

This won’t work. Attraction is built on how someone makes us feel. Logic usually has little or nothing to do with it.

The first thing you have to nail is your texting behavior. Do you:

a) Get angry with her in your texts?

b) Show neediness when she hasn’t texted for a while?

If you display any of these behavioral characteristics via text, you’re killing any physical attraction she felt for you straight away. She might have liked you, but you’re losing her.

But it’s okay – there’s still a way to rescue this situation!

All you need to do is break your old patterns of texting behavior and replace them with new ones.

a) Never get angry with her via text. If an argument is about to erupt, put your phone down immediately and go and do something that changes your state.

b) Never show neediness. If she hasn’t texted for a while, don’t send her a follow-up text. The longer you leave it, the more she’ll be attracted to you. How does this work? Provided you guys have already been texting a while, she will eventually wonder what you could possibly be up to. Realizing she totally forgot to text you back, she’ll hastily shoot you a text.

c) Ask for a date. But if she hesitates, don’t ask again. Just keep chatting as normal. And don’t whine that “we’re never gonna meet are we?” Be cool and act as though you have other options.

d) Never react with jealousy when she tells you about things that would ordinarily make you jealous. This immediately weakens your position and kills physical attraction. It’s the same if you try to claim ownership over her. Attraction is built on confidence. If you show jealousy, you’re not showing confidence. Girls want men who are so comfortable in their own skin that they don’t need to “own” someone.

We’re attracted to people – and things – that make us feel good!

If you make her feel great each time she texts you, she’ll want that feel good factor more and more.

As a matter of fact, she’ll become addicted to it!

This is science. Each time she texts you and the convo is funny and positive, she’ll get a hit of dopamine.

The more hits she gets, the more she’ll need you. Ergo, the more attracted she’ll be to you.

As a general rule, keep the conversation light and humorous as much as you can. There will be occasions when you need to be a bit more serious, but avoid going dark.

Be the man who, when she thinks of you and your texts, makes her feel awesome.

Know what makes a girl attracted to you? When you’ve thus far shown no real inclination for dirty talk… and then you suddenly hit her with it.

It’s really easy to do, too. For example, you could role play and invite her to get steamy with you.

“It’s just the two of us caught in a storm. We find a barn, take shelter and take our clothes off to dry off. What happens next?”

4. Don’t Be Her Therapist

Lots of guys do this wrong. They think the way to make a girl attracted to them is to be there for them.

“Talk to me about anything you want,” they say.

But you know what? That’s the things friends say. And the minute that text arrives in her inbox is the minute you’ve friend zoned yourself.

Be nice to her but don’t be her therapist. Don’t try to save the day all the time via text – that isn’t the way to make her desire you.

Get to know her, but don’t try to replace her best girl friend.

These are 4 ways to build physical attraction through texting. Be confident, show no jealousy, be positive and make her feel awesome, but be ever so careful of doing the things that will see you fall through the friend zone trap door.