Texting Acronyms To Jazz Up Your Messages

Have you ever received a text from someone that was written in a seemingly foreign language, such as: “Sorry 2BZ4UQT”? Today, acronyms have a way of popping up in many text exchanges, so it’s to your advantage to know the basics. Read on for your personal crash course on texting acronyms - from the most common acronyms to the more puzzling, as well as some tips for when to use them. 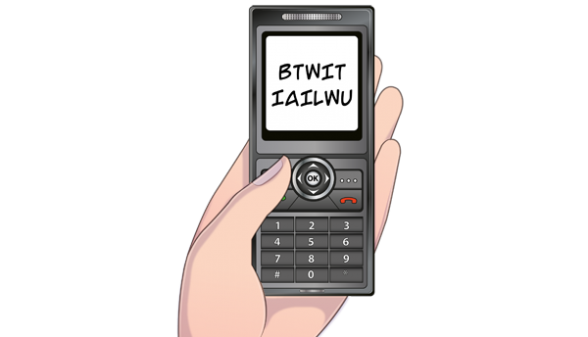 Texting Acronyms – When, Where, Why & How

Acronyms have become commonplace in text messages. Since the advent of Internet chat rooms and forums, a plethora of acronyms has been invented as shorthand for common phrases.

Some acronyms have been widely used and are familiar to just about everyone, while others are more obscure. Get ready for a personalized journey in acronyms where we’ll discuss some common acronyms and open your eyes to a few of the newer bits of text-speak that are becoming popular. Keep in mind that while using acronyms in your text messages can be fun, it is important to know when enough is enough.

We’re going to launch the texting acronyms journey by taking a look at a few that are universally used and accepted. For example, LOL, which means “laugh out loud,” is a very recognizable way to convey humor.
ROFL: Rolling on the floor laughing. This is similar to LOL, but ROFL is a little stronger.
OMG: Oh my god (as in “what a surprise” – rather than in a religious sense).

Some acronyms only take a bit of common sense to figure out. Even if you haven’t seen them before, you are likely to understand.
L8R: Later
RU<18: Are you over 18? 1-2-1 meeting: one to one meeting 4ever: forever 4Q: This one you need to sound out yourself....if you like to live on the edge, you could text 4Q to someone you don’t like. Of course, I would strongly advise against this if you are trying to win someone’s affection. Often, people will use abbreviations when texting. They may substitute: U: You 4: For You might have noticed that abbreviations are often merged into acronyms. For instance, what was originally a set of abbreviations has turned into: 2BZ4UQT: Too busy for you, cutie Although 2, 4, U, and QT might be easy to comprehend by themselves, it becomes harder when they are all merged together into an acronym.

Acronyms existed way before the advent of the Internet. Older acronyms were in use before Internet chat rooms and text messages even existed and are still popular today. These include:

ASAP: As soon as possible
BYOB: Bring your own beverage
SWAK: Sealed with a kiss/Sent with a kiss
ETA: Estimated time of arrival
TLC: Tender loving care
I<3U: I love you

Next we’re going to take a quick look at a few “courtesy texting acronyms.” When your conversation is treading in dangerous territory, it’s sometimes a good idea to soften a potentially controversial statement by using acronyms such as:

IME: In my experience
IMO: In my opinion
JS: Just saying

Sometimes you have no choice but to quickly break off a text conversation or a chat. If you find yourself in that situation, try one of these:

GTG: Got to go
BRB: Be right back
JAM: Just a minute
AFK: Away from keyboard
AFP: Away from phone
CUL: Catch you later

Today there is no shortage of spicy and sexy material being sent back and forth. If you know your texting partner works in an open-space environment, offer them the common courtesy of giving them a heads-up when sending a link, video, or image that contains risqué content such as nudity or foul language.

The easiest way to do this is to write:
NSFW: Not safe for work

Now that we’ve taken a look at some of the common acronyms, the common sense acronyms, and courtesy acronyms, we’re going to dive into the more cryptic versions. For example, if someone sent you a text message saying BTWITIAILWU, would you know what they were saying?

Don’t worry. When someone sends this type of message, they’re usually trying to be funny or coy. Once in a while, throwing in obscure texting acronyms adds a little bit of mystery to the conversation, and piques the interest of the recipient.

Many obscure acronyms exist all over the Internet. Some evolved by mashing together a few shorter acronyms, while others were developed by a small group of people, and spread from there. Some of these obscure acronyms can pave the way for a playful conversation with your boyfriend/girlfriend or crush. Here are a few examples:

KOTL: Kiss on the lips
DWPKOTL: Deep wet passionate kiss on the lips
BTWITIAILWU: By the way, I think I am in love with you
URAQTP: You are a cutie pie
ATTYOB: Anything That Turns You on Baby
GBH: Great big hug
GBTM: Get Back to me

Texting acronyms can be fun, flirty, and even practical for certain text exchanges. However, it’s a good idea to keep in mind that you should never overuse acronyms, or soon your messages can start looking like complete gibberish. If you’re interested in learning masterful texting, something that’s even more unique than exotic texting acronyms, then check out TEXT WEAPON. This comprehensive program will teach you everything you need to know to use texting to your ultimate romantic advantage.